Technology and I are often adversaries.  That's partly my fault and partly Technology's fault.  See, we just don't think alike.  Technology is so precise; you have to do things "just so" to make him work right.  I want to do things my way and have Technology read my mind and figure out how to make it happen.  Code? Please, give me intuition!  That's what I expect from the men in my life (right, Jeff?).

One of my good friends and customers, Jenn Rau, moved out to California a few months ago.  After she bought her new house, she said, "We'll have to do workshops via Skype."  To which I cheerily replied, "Absolutely, that would be so much fun!"  But, really I was thinking, "I'm never gonna see this girl's face again."  Technology and I just don't see eye to eye and I thought Jenn and I weren't going to anymore either.

Installing Skype was actually incredibly easy.  Technology prompted me with all of these questions and I answered yes to all of them, whether I knew what he was talking about or not.  I even took a photo of myself to go next to my account name and tested the audio.  Technology and I were sympatico, finally understanding each other for the first time.  Or, was he just leading me on, making me think I could actually use him?  I figured there'd be some kind of glitch when I actually tried to make him work at last night's Typeset Workshop.  Four of my "regulars" were over, including Jenn's sister, Audrey, so at least I was in supportive company for when this whole thing flopped in my face.

Imagine my pleasant surprise when I dialed Jenn's number and she actually appeared!  Jenn gave us a tour of her gorgeous new home.  A home which did not look like it was newly moved into...paintings hung, everything decorated and Jenn caught up in all of her scrapbooking, I don't know where the woman gets the energy.  Anyhow, I digress, we were able to converse, crop and even hear a concert performed by her youngest with the help of a new Dora guitar.  All this made possible by Mr. Wonderful-Technology. 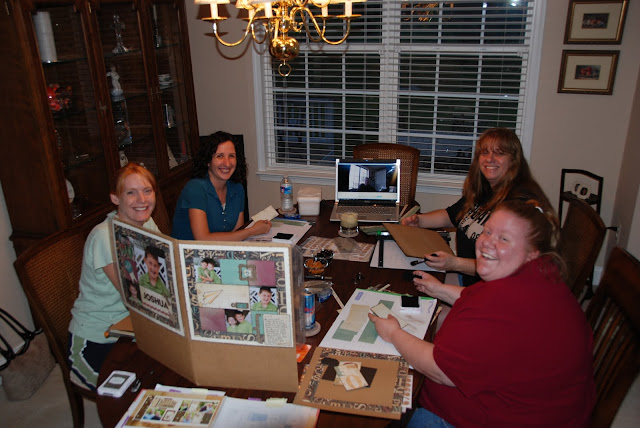 Here's a photo of the girls cropping...with Jenn on Skype!
Posted by Michelle Jones at 11:14 AM

Michelle Jones
Leesburg, Virginia, United States
As a Close To My Heart Independent Consultant, I can combine my love for spending time with my family and friends, preserving memories and papercrafting. My wonderful husband and two sweet boys are supportive of my crafty habit. Life is blissfully full with our family of four and finding time to scrapbook our family memories or to create homemade cards is challenging. So, after the kids go to bed, I often pour myself a glass of wine and start in on my "Scrappy Hour." 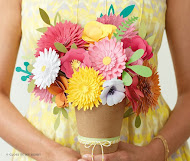 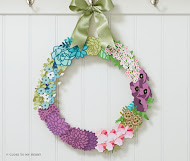 You'll be seeing blooms for every season of life with this latest CTMH Cricut cartridge!